Big day ahead, but nothing that wouldn’t seem normal in the UK, 4km with a 500m climb and 20km mixed cross country and fast single track descent. But with a starting altitude of 3800m, it wasn’t going to be easy. About another hour again in the van took us to the start of the trail. Immediately into the climb after getting loaded up with supplies for the day.

The trail would take us to our most remote location of the trip, which I think added to the nerves of the phsicall effort needed. We started off near the village of Chinchero, to the east of Lake Puray and would finish up near Lamay, in an area called Sacllo.

The climb was as expected really, started off OK, then turned into a complete slog as the air got even thinner and the legs started screaming. Not helped by the rocky track, which made it like cycling through a dry riverbed, impossible to maintain a good cadence and momentum.  The reward at the top was an amazing view of the valley and a recovery snickers. Surprisingly, we were the only people around. Once everyone gathered at the top we were off down the other side of the pass, heading down to Inca Trail on our own path through the rocks and reeds. The trail was fast, fast enough that I didn’t have time to slow for a long set of 4 stairs and had no choice but to pull up and hope for the best, it worked out well, but I suspect it started the puncture that appeared 10minutes later.

Even Managed a ‘selfie’

We descended down through a narrow valley, and had no option but to walk down the ancient stairs, even a challenge on foot, not embarrassed to get off the bike! Shortley after I`d get struck with my second puncture of the day, just on the run up to a technical slope into a `thread the needle` bridge over a canyon, talk about bad timing.

For lunch we stopped at the view point over Calca, then headed down the thin track to the Inca runs at Huchuy Quosqo. Quick stop for some cultural intake, and some grief from the grounds keeper for cyclinf on his grass, then off again. The group split as some guys took the easier, but reminded to mention, longer, car track. Never one to pass up a challenge, myself and Karl followed Carlos into the technical descent. This was probably the toughest yet, most due to being tired from the morning, at this point 4.5 hours ago. Loose rock, vertical drops, trees, evil loking bushes, technical switchbacks and cow shit keep us on our toes.

Back down to the village for a needed shower before a half chicken and chips whilst watching Lord of the Rings with the locals, followed up by some pye de mazana (Apple pie) from a cake shop. Well, can`t avoid the luxuary food all the time! 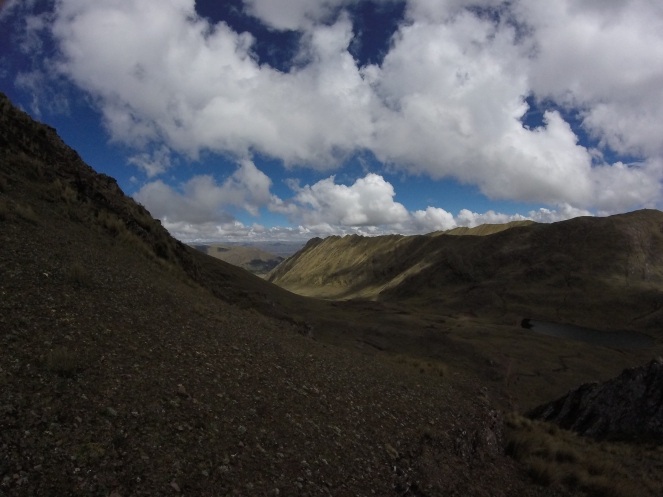 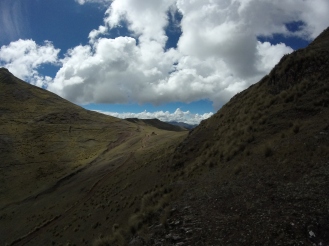 The guides Carlos and `Charlie` 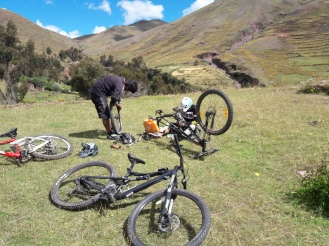 The stairs, walking only!

Blasting through the valley 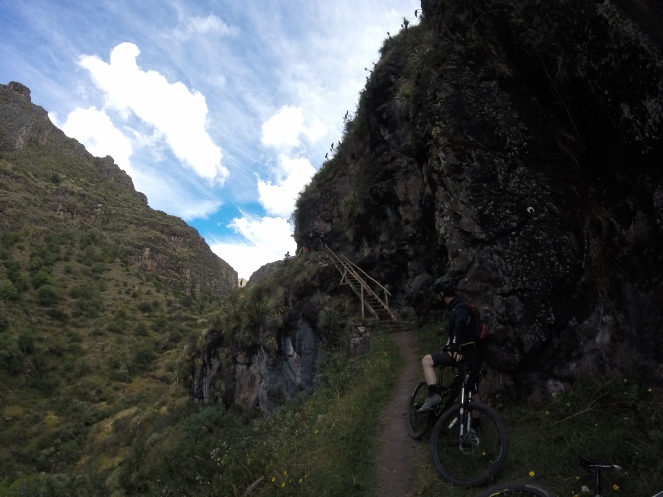 …bit of a drop off the trail though! 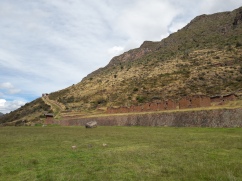 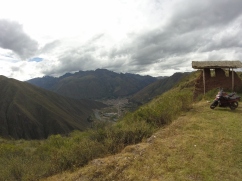